On the 16th June we held the main and closing session of the Commoning Design and Designing Commons workshop for the Participatory Design Conference 2020. 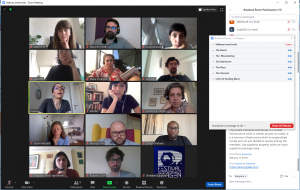 Ahead of the session, we split into four groups of four people and, through some asynchronous collaboration, we started bringing up keywords inspired by each others’ position statements. On the 16th, a half day of collaborative brainstorming and writing took place supported by etherpad, onlyoffice, and our adaptation of Zoom’s “Breakout rooms” to allow virtual room hopping in a manner loosely inspired by the Open Space Technology method. We enriched and better delineated the content of what we called a pluriversal card deck on the topic of commoning and design, by building on those initial keywords. 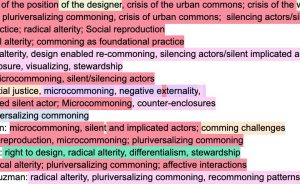 The card deck includes definitions of terms and practices that populate commons discourse, as well as few concrete examples of commoning and PD initiatives in this area. We consider this card deck to be open and pluriversal because:

8.12.2020 UDATE: After some post-production work by the workshop organisers in order to polish the content and layout of the card-deck, as well as to decide the last practicalities with the workshop participants, we are happy to say that v2 of the Commoning Design Pluriversal card deck is out! More information here 🙂

During the past weeks we have been busy advertising the workshop, reviewing the papers received, and finalizing the details of the remote/online workshop on Commoning Design and Designing Commons which will take place at the Participatory Design Conference 2020.

Now, we really look forward to engage in the discourse around commoning and participatory design with the scholars and practitioners who wrote us to be part of the workshop.

Check the following page, if you want to peek at the list of topics that will be the basis for our reflections and work: themes and participants!