The Commoning Design pluriversal slide-deck is the outcome of a collaborative effort which involved people with different interests, skills, and backgrounds united by their shared curiosity around the relationship between commoning and design. Such effort took place in the context of the Participatory Design Conference 2020 and organized around the workshop “Commoning Design and Designing Commons”.

We are happy to release here the v2.0 of the slide deck, which includes further elaborations of slides and post-processing of the workshop outcomes. 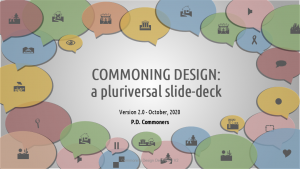 The slide-deck is released by the P.D.Commoners collective under the Creative Commons license (CC BY-NC-SA v4.0) and we encourage you to use, expand and share the slide deck as much as you want following the license conditions.

If you would like to contribute to the slide-deck’s further editions, read how in the last slide of the deck and write P.D.Commoners an e-mail.