Due to the restrictions imposed by the Coronavirus pandemic, the Commoning Design and Designing Commons workshop we had planned to take place on 15th and/or 16th June 2020 at the Participatory Design Conference in Manizales, Colombia, will be held as a virtual one.

More information on how to participate is found on the workshop page. We are looking forward to your submissions!

We had the pleasure to co-host, together with Dr Peter Parker and other colleagues from the Department of Urban Studies at Malmö University, Dr Mara Ferreri from the Institute of Government and Public Policy (IGOP) at the Autonomous University of Barcelona. The session successfully took place online, bringing together participants in three different locations. 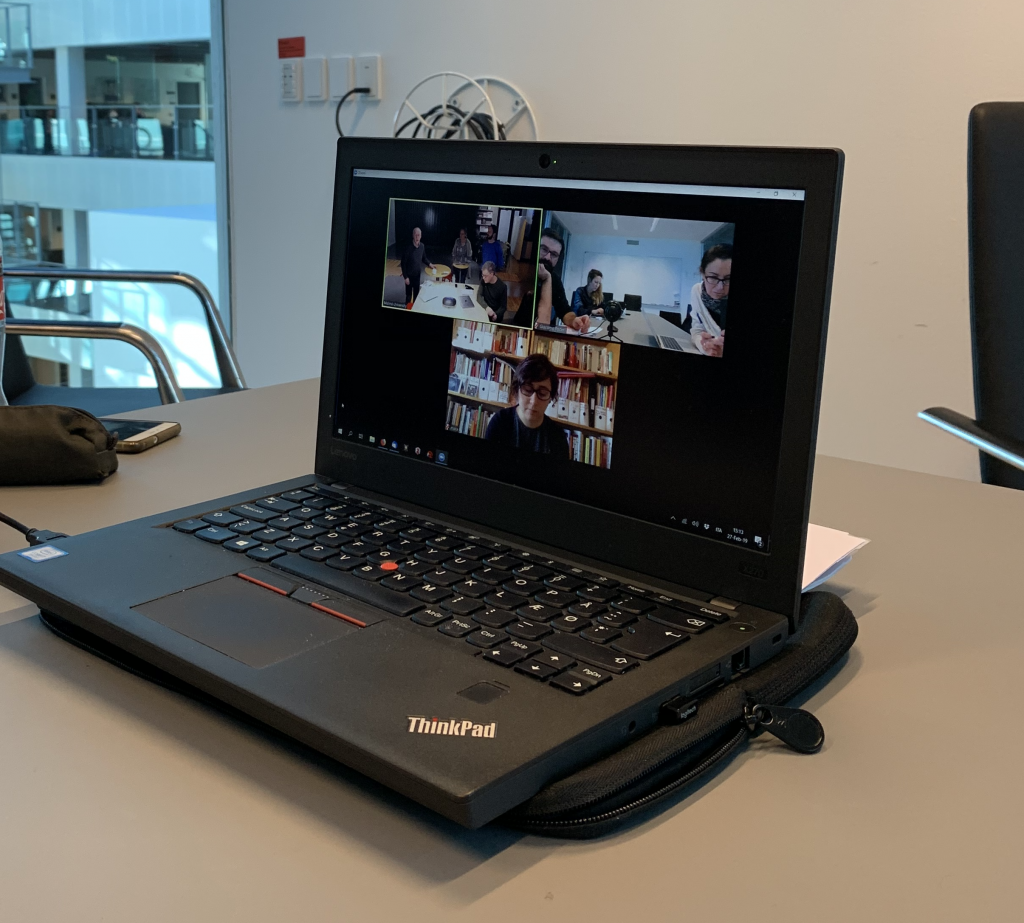 The readings chosen for the session were two texts by Mara, which we discussed in the following order:

In Ferreri (2016), Mara describes practices of commoning encountered in an ‘freeshop’ / open meeting and exchange space set up by the Off Market Collective in a squatted retail space in North London. Through this example, she highlights the possibility for “commoning a squatted space beyond the boundaries of intentional squatting and activist communities”. The Off Market Collective is seen as an urban commons, with both potential and limitations. The open ‘shop’  allowed for experimentation around the sharing of resources, time and space inside a surrounding landscape of commodified consumption. The existence of different groups at stake, such as the core initiators, the volunteers who later joined, and the visitors who were often coming from a vulnerable social position, challenged the radical openness of the space and brought forward tensions between the more radical initial drive for the space and the need to acknowledge and make space for those less engaged, and how to sustain relationship between these actors.

In Ferreri (2017), the commons are explored not as things (resources), but as a verb: commoning (see also Linebaugh, 2008). Based on the reading, we discussed the aspect of language as related to the commons was discussed (common goods) as well as the notion of commons versus that of public. Activities of commoning can be performed on private land, creating a layer (or more) of use by the commons, where as other layers might remain in use by the private owner. However, we should also be cautious in our terminology: maybe personal rather than private? Personal space still implies individuality but allows for other types of configurations. Can we think about rights of use through different configurations of collectivity? Indeed, one of the core argument that emerged from this part of the discussion is that we (scholars and practitioners alike) might be in need of a commoning of language – to talk about the commons – much more than we realize. This became particularly evident when we raised some comparisons among the different ways of institutioning land property and land use rights in some European countries on one hand, and to conceive and talk about them in different European languages (e.g. English, Swedish, German terminologies for shared land).

When it comes to the relationship to the public sector, the commons in the Off Market case was stemming from a more adversarial stance towards the state, whereas there are other examples (e.g. Cleaning day in Finland), where collaboration with the state is sought, even in the reclaim of public space for the commons. In connection to this part of the discussion we also raised the challenging point of mediating between the collective dimension of commons and the individual ones. On the one hand, looking at the collective subjectivities acting as political actors in the struggle to reclaim spaces, rights, sustainable ways of living, is a crucial aspect, particularly when the need to mediate and interact at institutional levels emerge. On the other hand, we shall not lose sight of the diversity of individual subjects who engage with commoning coming from different backgrounds, with different needs and expectations with regards to the commons  themselves.

To this regard a relevant remark was made to highlight the fact that while in the area of urban commons studies the focus on collective subjectivities and their relationships with institutions is particularly marked, the broader discourse on the commons also includes specific perspectives that privilege issues such as the relational dimension of commoning, their physical realm of possibilities, the mental dispositions of actors involved, as well as their social contexts.

A few useful references were mentioned during the discussion about the diversity of commoning practices in the urban context:

Huron, A. (2018). Carving Out the Commons: Tenant Organizing and Housing Cooperatives in Washington. University of Minnesota Press.

Starecheski, A. (2016). Ours to Lose: When Squatters Became Homeowners in New York City. University of Chicago Press.

Linebaugh, P. (2008) The Magna Carta Manifesto: liberties and commons for all. Berkeley and Los Angeles, University of California Press.

Short report from our second session on 5.12.2018. We discussed the following reading:

Joanna started by saying that Charlotte Hess was invited at the Infrastructuring the Commons seminar that took place in 2013 at the Aalto University in Finland. There, Hess talked at length about her collaboration with the Ostroms and also brought forward some aspects of mapping the commons. The video of her talk is available here, and her slides here.

Giacomo gave a brief summary of the paper, stressing that Ostrom’s article is a literature mapping study. The article, with its massive references list, reflects Hess’ background in library sciences. Hess explains, that along the years, she had noticed a lot of literature referring the the commons, but they not necessarily aligned with Ostrom’s focus on Common-pool resources, nor an economic perspective. Hess argues that there was a need to refer to these commons that are not the traditional ones (like forests, irrigation systems, fisheries… so all that Ostrom has studied) as the “new” commons. She maps these new commons, based on the articles she has encountered and which refer to them, taking the resource they refer to as the basis for the proposed categorisation (into what she refers to as “sectors”).

Together with Yvonne, Maria, and Vasiliki, we discussed at length both Hess’ mapping and naming of the “new commons”. Many of us felt uneasy with both.  Hess acknowledges the arbitrariness of her categorisation, but does not really explain the rationale behind her decisions. An exercise in trying out other ways to categorise the new commons by trying to extract from the body of literature, other units that the one of resource. Some might be for example taken from Hess’ list of observations reported on p-39, e.g. sustainability, equity, collaboration etc.

The name “new commons” was also confusing as, despite being used to differentiate from the traditional understanding of the commons (à la Ostrom), Hess still uses economic terms, such as resources. Other perspectives might be interesting to examine, which would use different political tools and methodologies. Vasiliki suggested the autonomous marxist perspective. How to talk about the commons outside the main path of capitalism?

We also mused whether the materiality of the resource makes a difference in the protection and management of the commons. Yvonne brought forward the Open Source Software case. Here the overuse of the software is not the issue, but rather its abandonment is.

We ended up with Maria bringing up the issue of profit: how does it enter in conversation with the commons? Is commodification and the deceit brought by it to good ideas (e.g. from commons-like couchsurfing to AirBnb as a big business) a new tragedy of the commons? 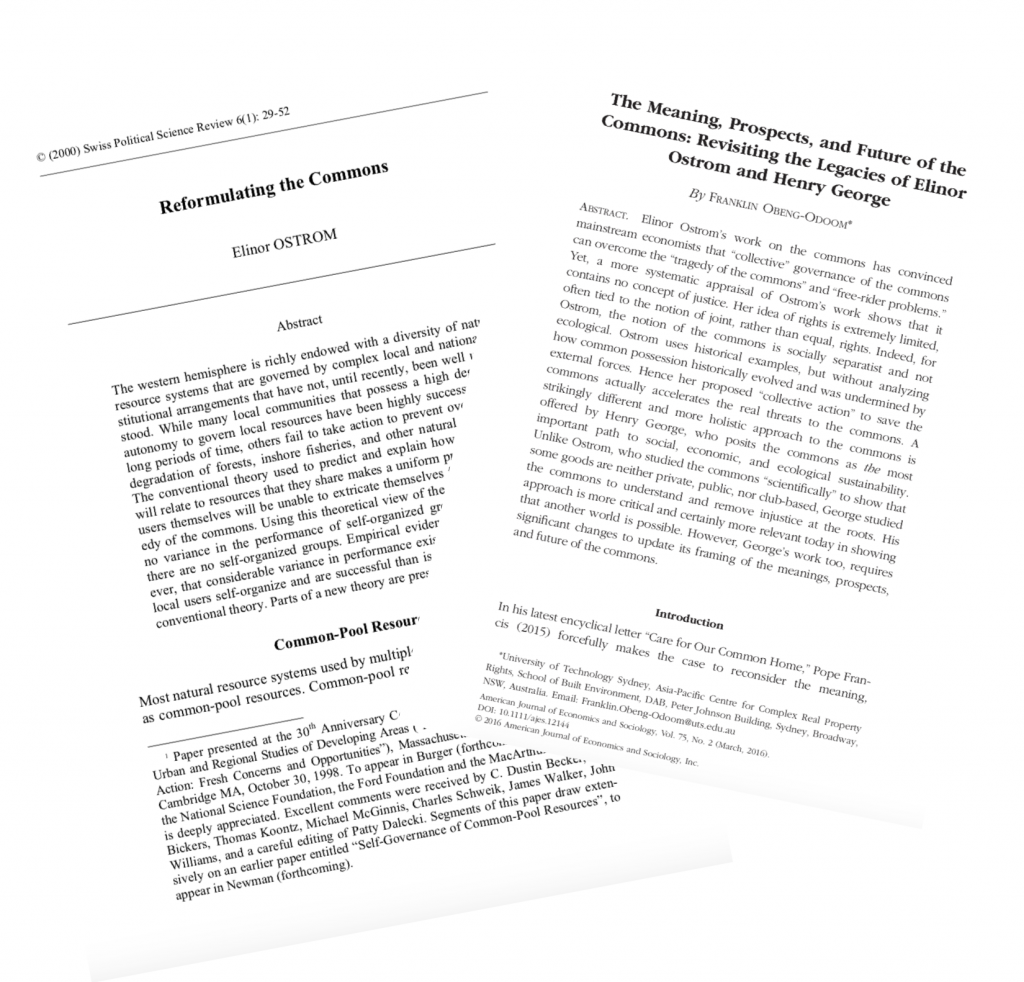