The project, named PolarVis, examines the role of visual content in processes of political polarization and belonging in the digital age.  With visual content increasingly underpinning both conflict and connection, photos, videos, and memes offer a powerful form of political communication. Political actors use them to frame issues, mobilise support, and build (or undermine) legitimacy, and citizens and platforms play a part by modifying, sharing and amplifying them. PolarVis aims at combining in-depth qualitative approaches, network analysis, and computational text and image analysis methods to understand how, why, and with what consequences visual content becomes a mechanism of polarization and belonging in Europe. We’ll focus on the intergenerational issue of climate change and green transition, and address four key questions: (1) How do movements use visual content in their communication? (2) What are the characteristics of this visual content and how does it form visual narratives? (3) How do online audiences react to the visual content? (4) How does this content spread online, and allow like-minded or opposed groups to emerge?

While the results will come later :-D, it is now time to hire a PhD student to work on the project. ITU has a call out of a PhD in Computational Communication to be located between the newly formed Human Centered Data Science group and the NERDS group.  The ideal candidate will be interested in online social phenomena and have experience working with digital data and network analysis. The project will start in October, thus the ideal starting date for the PhD position is October or soon thereafter.

Multilayer networks are an increasingly popular way to model complex relations between various types of entities and they have been applied to a large number of real-world data sets. Their intrinsic complexity makes the visualization of this type of network extremely challenging and still an open research area. To help the visual exploration of complex multilayer network structures, today we are releasing MNET-VR. MNET-VR is the output of a research project that I carried on with Leonard Maxim and that was based at the Networks, Data & Society research group of the IT University of Copenhagen and supported by the Digital Design Department. MNET-VR explores the potential of Virtual Reality to visualize this type of network structure.

MNET-VR offers basic functions to visualize and filter multilayer network structures. MNET-VR does not offer, at this stage, the possibility to manipulate the network layout. A proper 3D layout of the network can be obtained through the R package multinet. While its primary goal is to explore multilayer networks, MNET-VR can also be used to visualize single layer networks using igraph and multinet. The export of of the files for visualization is done through two simple R functions that we make available on the website. MNET-VR is designed for Oculus Rift/Oculus Quest with Link.

Here you can get a preview of how it works even it the video format does not really give you the full experience:

I’m very happy that our paper An analysis of the Consequences of the General Data Protection Regulation on Social Network Research has now been accepted for publication on ACM Transactions on Social Computing [you can read a pre-print below or -soon- on arxiv].  I believe this can actually be a useful paper and not just a line to add on a cv (nothing wrong with that!). 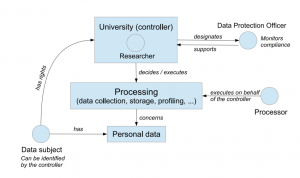 The paper has a very hands-on approach, trying to address many of the actual concerns that people working with social network and social media data might have. Nevertheless, I think that considering the paper, as well as GDPR, just a list of dos and don’ts, would mean to miss an opportunity to think about the good that might come out of GDPR.  GDPR offers an opportunity to computational researchers working with online data to re-think our approach to data collection, data storage and data sharing, keeping in mind that behind those csv files there are people – data subjects with rights-  that we, lost as we are in our research, often fail to consider.
It is not (just) a matter of consent, privacy or APIs access. By forcing us to map the whole data flow and all the actors involved, GDPR gives us the opportunity to pause and ask ourselves key questions – such as How long will we store the data? What if we tried to obtain consent?  etc. – even if we might not like the answers.

Sat, Sept. 7th, I’m participating at Techfest 2019 a 3-day festival in Copenhagen with 200+ events on humans and technology.  There I’ll be coordinating a session on “The Future of Social Media Data Research: Let’s Do It Right When it Comes to Data, Privacy and Public-Interest” were I’ll discuss how accesso to social media data for research has changed over the year, how various scandals have impacted and what I see as a general trend for the future.

Session presentation:
Social media has become a central data source for the study of individual as well as societal issues. The unprecedented scale and granularity of this type of data allow researchers to observe social dynamics as they unfold and hold high potential. Nevertheless, recent scandals and data-breaches such as in the case of Cambridge Analytica, and the social media platforms’ reaction, have shown the potential contradictions underlying this kind of research. Who holds the right to do public-interest research on this data? How to make it freely available for researchers? Who should be hold accountable?
This session will discuss these questions that will play a central role in shaping the future of research in many fields.