New publication: The Routledge Companion to Social Media and Politics 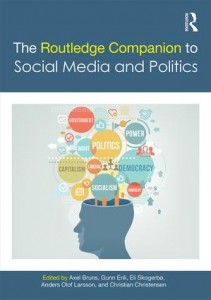 Editors Axel Bruns, Gunn Enli, Eli Skogerbø, Anders Olof Larsson, and Christian Christensen have taken on the task to put together a research compendium on Social Media and Politics that includes six continents. Therewith they go beyond established research in the US and UK and shed light on how Social Media is used for political protests, campaigns, and communication arcoss the globe. DECIDIS researchers Christina Neumayer and Luca Rossi are part of this experiment and have each contributed with up-to-date research.

Christina Neumayer’s chapter compares the formulation of antagonistic relationships and self-representation by fascist and anti-fascist groups in social media. Her argument draws on a qualitative analysis of communication and self-representation in social media and media coverage related to marches planned by nationalist groups in former East Germany as well as counter protests by anti-fascist groups, NGOs, and civil society. The chapter concludes that the use of social media in resistance at both ends of the political spectrum is only partially dependent on a group’s political ideology, and is more dependent on a group’s self-representation as marginalized and oppositional.

Luca Rossi compared together with Mario Orefice (University of Urbino Carlo Bo) Facebook and Twitter data collected during the 2013 Italian general election. Their chapter explores the central role of social media in contemporary election campaigns. While the role of social media is largely accepted, the question which specific social media site has the largest influence in voters’ decisions and how the various social media interacts with mass media is an open debate. The chapter concludes by showing how, in the Italian context, Twitter is largely dependent on TV political talk shows and how neither of the two observe social media can provide a representative picture of the whole political debate.