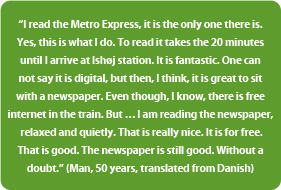 The study “Media Literacy in a Danish Context” was carried out in collaboration with The Agency for Culture in Denmark and the Media Council for Children and Youth. The purpose of the study was to investigate the level of media competences and media literacy in Denmark and to identify key elements for further studies and initiatives in relation to media literacy. An important scope of the study was to involve a wide range of the Danish population across age, address, background, and media use. Not least, because this project is part of the Agency for Culture’s overall objective on mapping the media development in Denmark.

In total, the project visited and interviewed 20 families who live in the five regions in Denmark. The analysis shows that the participants are quite competent media users with variations across different media. It also indicates that competences are only one aspect of literacy and there were also big differences in how they approached media critically and how they reflected on the role of media in their everyday lives. Generally participants felt that media make their everyday life easier, even though using media fills big parts of it.

The report concludes and recommends that further investigations are needed and suggested new full scale studies focussing on the major groups of ordinary Danes, respectively those with special issues and needs, and finally the very marginalized citizens. All groups require specifically focused studies and initiatives for raising the media literacy level.

The summary and the full report (in Danish) can be found here: http://slks.dk/mediernes-udvikling-2015/specialrapporter/media-literacy-i-en-dansk-kontekst/

A summary in English will be posted in January on this blog.