In focus at IGF: Human rights and the internet

Questions about human rights occur in multiple of the workshops, panels, open fora and plenary sessions at this year’s Internet Governance Forum in Joäo Pessoa, Brazil. It mainly refers to the right to have access to the internet, respectively how human rights can be protected through exploiting the positive opportunities of the internet and preventing the negative consequences.

The human rights topic obviously occurs in relation to the ambition to provide opportunities for the poor around the globe, in particular referring to “the next billion” to get online, and mainly in developing countries although it is still an issue for some groups in the developed parts of the world. It is mentioned that we cannot have half of the world not being connected to what has developed to be the central nervous system of global and local economy, culture, education, information etc.

We also hear from many participants that provide evidence for the specific difficult conditions for suppressed women and how online access could potentially support and strengthen their situation. We hear evidense about how e.i. hate speech encourage to violent opposition towards refugees around the globe, hence making the situations of refugees (often referred to here as migrants which may not be the same) much more difficult and that laborates ideological, cultural, emotional divides.

Another emerging but strong issue, that appears in many debates is the question about radicalization of especially youth, It has been underlined that i.e. critical opposition is not to be defined as radical positions even if it is perceived and treated as such in some countries. It has also been strongly stated that the internet as such is not the cause of radicalization, but merely a trigger or a channel. The contextual, cultural, social conditions in each country and for each child define the risk and the potential radicalization of the child or young person. The internet can just as well be seen as a resource for countering violent radicailzation or to understand the contexts and alter them. All in all, lit 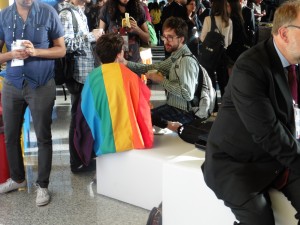 eracy is a way to counter negative violent agency and support constructive uses.